Outgoing German Chancellor; Angela Merkel is being treated to a traditional sendoff on Thursday, involving a military ceremony with a brass band playing her choice of music — reported to include a 1970s punk song(this is their highest ceremony for a civilian).

In the “Großer Zapfenstreich” ceremony, pared-back due to COVID-19 restrictions, the Bundeswehr staff music corps played a hymn, a 1960s song.

German daily Taz reported that Merkel has requested three songs, two of which the Staff Band of the Bundeswehr had to scramble to arrange. One is the 18th-century Christian hymn “Holy God, We Praise thy Name,” perhaps a natural choice for the daughter of a Protestant pastor.

The second is a popular chanson by German singer Hildegard Knef called “It Shall Rain Red Roses for Me.”

Merkel’s third choice, which raised some eyebrows, is the song “You Forgot the Color Film” released in 1974 by East German-born punk singer Nina Hagen. In it, the singer recounts a young woman’s lament that her boyfriend failed to take color pictures of their beach holiday.

Hagen, like Merkel, grew up in East Germany but emigrated to the West in 1976 after clashing with the communist country’s authorities.

Born in the northern port city of Hamburg as the daughter of a Protestant pastor, Merkel grew up in Communist East Germany before taking the helm of a predominantly male, Catholic western German party, the Christian Democratic Union (CDU).

After 16 years in office, she is due to be succeeded as chancellor by Social Democrat Olaf Scholz next week. 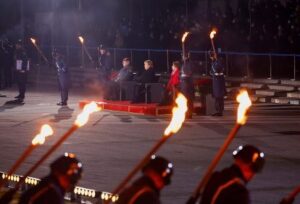 According to Reuters, the 67yrs-old Chancellor is leaving big shoes to fill. She has navigated Germany and Europe through multiple crises and been a champion of liberal democracy in the face of rising authoritarianism worldwide.

Her critics say she has managed rather than solved problems and leaves her successor tough decisions on many fronts.

2023:”I Am Confident in PDP, We Have Corrected Our Mistakes And Are Now The Party The People Desire” – Gov Wike
Pope Francis Urges Europe To Shed Its ‘Walls Of Fear’