In a bid to save Julius Jones from the grip of death, Lawyers for the death row inmate has asked a federal judge on Thursday morning to stay till the last minute on the gallows, citing new evidence they say that the proposed protocol “could subject prisoners to a substantial risk of suffering severe pain.”

The motion for an injunction to halt the execution set for 4 p.m. cites the state’s execution by lethal injection of another inmate, John Grant, on Oct. 28 in which witnesses said he convulsed and vomited before dying. The state Department of Corrections said there were no complications in that execution.

The motion argues that Grant’s execution provides “compelling evidence that [Oklahoma’s] Execution Protocol and the use of midazolam, as well as the cursory consciousness checks done under the Protocol, pose a serious and substantial risk of suffering and pain to prisoners.” 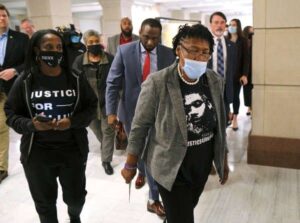 The move comes amid an outpouring of appeals to Governor Kevin Stitt to halt Jones’ execution set for later on Thursday for a 22-year-old murder in which doubts about his guilt have been raised. Advocates are urging the governor to accept a clemency recommendation of the state Pardon and Parole Board, which voted 3-1 to commute his sentence to life in prison.

Jones has been jailed for nearly 20 years after being convicted in the fatal shooting of Paul Howell during the 1999 carjacking. He was sentenced to death at the age of 22 but maintained his innocence.

On Wednesday, outside Governor Kevin Stitt’s office, slogans of “Free Julius” echoed throughout the building as Jones’ family, friends and supporters gathered to make their final appeal to stop Thursday’s execution, In a heartfelt monologue declaring his innocence, Jones’ mother, Madeline Davis-Jones, said, “If my child is killed tomorrow, or any day, it must be without a doubt.”

Our hearts are with the family of Jones, we pray and hope that he gets saved.

Up until now, Stitt had not yet said whether he would grant pardon, as recommended by a majority vote of the Oklahoma Pardon and Parole Board this month.

The clock is ticking.

Continue Reading
You may also like...
Related Topics:Julius Jones, Oklahoma