Dowen College, a secondary school located in the Lekki area of Lagos State, will not reopen on Tuesday, government authorities said.
This is as other private primary and secondary schools in Lagos prepare to resume for the commencement of the second term on Tuesday, January 4.

According to Premium Times, government sources noted that the school will not be permitted to resume until investigations into the unfortunate incident of the death of one of its students, Sylvester Oromoni Junior, reached a reasonable stage.

Oromoni was beaten and forced to drink a poisonous substance allegedly by some bullying seniors. This is as the government advised school administrators to step up school safety measures and reduce unfavourable safety incidences across schools and their neighbourhoods.

In an interview, an assistant director in charge of the public affairs unit, ministry of education, Ganiu Lawal, said very soon, the school would join others to resume but “not until ongoing investigations into the unfortunate incident reach an advanced stage.”
According to Lawal, since the matter was not strictly a state matter and with the involvement of the police and other parties, “it would be ideal for all “t’s” to be crossed and “I’s” to be dotted.

“But I can assure you that very soon the issue will be resolved, but they are not resuming tomorrow,” Lawal said.
In a statement on Monday, the state’s Commissioner for Education, Folasade Adefisayo, said bullying, cultism and other vices would not be tolerated in any part of the school. The caution was coming some weeks after the death of Master Oromoni. 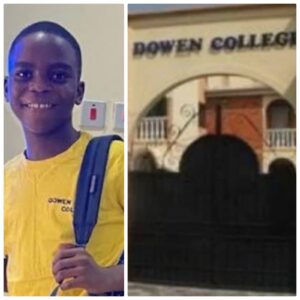 “Devise appropriate strategies to advance teacher, student interaction in order to gain an insight and expose negative tendencies before they metamorphose into unfortunate situations.

Adequate monitoring, especially as it affects boarding school students should be enforced to prevent the incidence of bullying and all other vices,” the commissioner advised. On November 30, 2021, Sylvester, a 12-year-old JSS 2 student of the school, died under controversial circumstances.
The management of the school had insisted that the boy passed away after sustaining a leg injury.

However, the family revealed that their son was brutalised by bullies and a substance was forced down his throat.
Meanwhile, an autopsy conducted by the Consultant Pathologist, Dr Clement Vhriterhire, at the Central Hospital, Warri, concluded that Sylvester died of “acute lung injury due to chemical intoxication in a background of blunt force trauma.”

The student’s corpse was conveyed to Lagos and a fresh autopsy was ordered by the police. The Lagos State Police Command has so far released the housemaster and other Dowen College staffer who were arrested in connection with the student’s death.