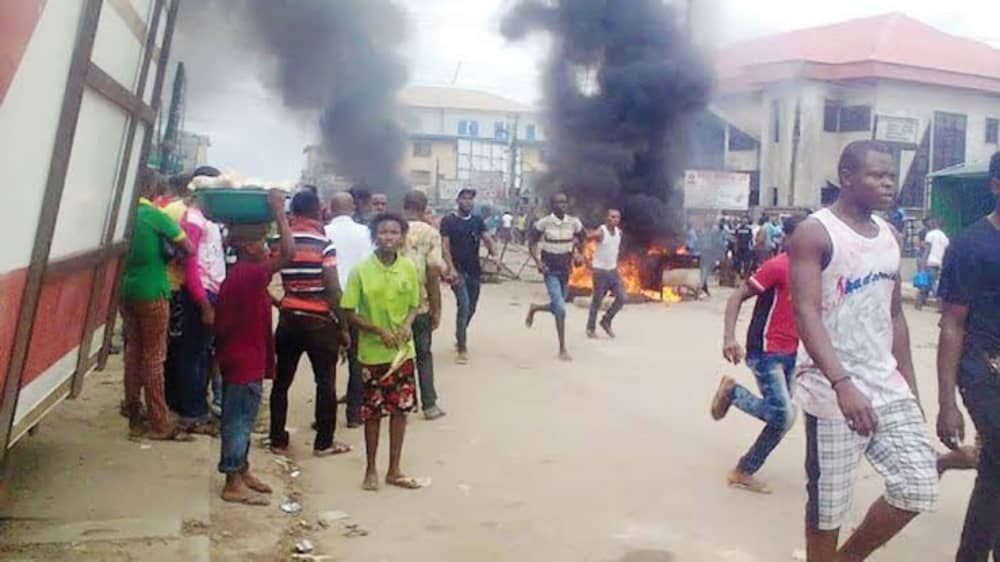 Angry youths overpowered and set two hoodlums on fire suspected of robbing Point of Sale (POS) operators and other vulnerable targets in the Uyo metropolis on Wednesday.

As at the time of arrival at the scene of the crime, the burned bodies of the accused thieves were still smoking and spewing thick smoke into the air.

Two thieves on a motorcycle attempted to overpower a PoS attendant while dispensing cash to clients at Ikot Oku Ikono, near the newly commissioned fly-over bridge, on the outskirts of Uyo, the state capital, at about 10:30 a.m., according to reports.

The suspects ran out of luck, according to eyewitness Nyenime Effiong, a tricycle operator when the alarm raised by the PoS attendant attracted furious youths, who stomped on them and set fire to them before the Police agents arrived.

He said, “They thought their operation would be swift, but it turned to be end-of-the-road for them. They arrived on a motorcycle and the one on the passenger seat alighted and suddenly accosted the PoS operator with a gun and demanded cash.

“She immediately screamed at the sight of the gun, but in a swift reaction, some commercial minibus and tricycle drivers with other angry youths trooped to the scene, chased the thieves to where they were overpowered.

“Before the motorcycle rider, who was still steaming the bike while waiting for his fellow accomplice to get the cash from the attendant could escape, he was apprehended before he could speed away.”

According to several attentive youths, the crooks who carry out their evil operations on motorbikes, “are also in the habits of targeting pump attendants at filling stations and supermarkets on the metropolis”. 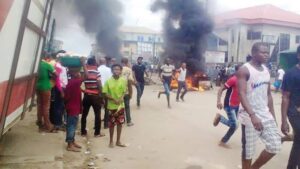 Concerned about a new wave of crimes targeting soft targets as the holidays approach, Effiong Bassey reports that young people in crime-prone areas of the city have organized vigilante groups. Ibiam, Atiku Abubakar, Ikpa Road, Urua Ekpa, Ikot Oku Ubo, and other nearby streets are among them.

“The proper thing should have been for them to be apprehended and handed over to the police. But they took the law into their hand. An innocent person might be killed, lynched, or wounded. So the best thing is to hand the person to the police, ” He said.

“You cannot be the complainant, the police, the prosecutor, the judge in a matter of such nature. It’s becoming rampant and unacceptable. The Commission of Police is miffed by such development and he has said that henceforth such act will not be tolerated.”

Continue Reading
You may also like...
Related Topics:Akwa Ibom, POS