Enugu State Governor Ifeanyi Ugwuanyi launched his administration’s concerted efforts to help rural citizens by providing government services to create opportunities for fairness and equality for everyone who wants to have financial security, exercise their democratic rights, and lead a healthy life.

Additionally, the state government has invested in several infrastructure projects across the 17 local governments of Enugu State, as well as looking to uncover and cultivate youth talent to help them obtain employment, provide socialization, and unite their communities.

as a result, the governor launched a standard-double Lawn Tennis Court at Igbo-Eze North Local Government Area Stadium, Ogrute, Enugu Ezike, along with various other initiatives in line with his vision for an active and sports-focused community.

Upon inauguration of the sports facility, Governor Ugwuanyi, who was accompanied by his Project Development and Implementation (PDI) adviser, Engr. Dr. (Mrs.) MaryRose Obiageli Abba, referred to sports as a modern social phenomenon with the ability to improve social ties, promote unity, prevent disease, and improve health.

The governor went on to say that, since it is now a recreational and sporting activity enjoyed by people of many diverse cultures, socio-economic levels, and ages, tennis has grown into an activity for people of all walks of life. 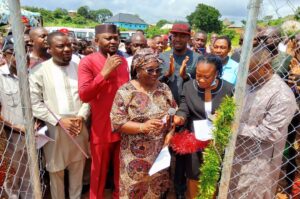 The government of Ugwuanyi in the Igbo-Eze North LGA has created rural roads and other essential projects, including the current Amenity Hospital project, which the governor himself performed the foundation-laying ceremony for.

He made this comment to a jubilant group of Igbo-Eze North LGA stakeholders and royal fathers, who gathered to witness the ceremony.

His Special Adviser on PDI, Engr. Abba, was commended by Gov. Ugwuanyi for the promptness and financial prudence in executing the project. He also expressed his gratitude to Chairman of Igbo-Eze North LGA, Engr. Ejike Itodo, as well as the leaders of the PDP and the people of the council area, saying that he believes “the maintenance, safety, and security of the sports facility was ensured in Igbo-Eze North LGA.”

The Chairman of Igbo-Eze North LGA, Engr. Itodo, spoke in favor of Gov. Ugwuanyi, noting that he initiated a sports facility and other projects of infrastructure construction under his administration.

Engineer Itodo emphasized that promoting sporting activities in rural regions is a wonderful development, particularly since the governor announced his intent to build a sports facility in Igbo-Eze North LGA.

As you can see, we have a governor that loves peace and progress. His Excellency was the person who began the Ogrute General Hospital Amenity Hospital project. He was also the one who led the project to construct the General Hospital’s Isolation Wing, which included the Cottage Hospital. Our governor took the initiative, starting with the municipal roadways all the way to the town hall, and the project is finished. He worked on two water borehole projects: One he began, and the other he constructed. 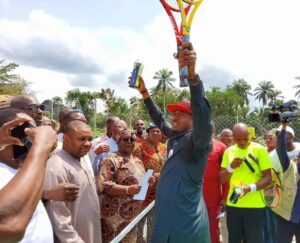 Since our governor is a sports fan, we can’t thank him enough for establishing a standard-double sports facility that is absolutely critical to our overall health and sports growth.

All the other speakers at the event, such as Hon. Innocent Ugwu of the Igbo-Eze North LGA (II), Hon. Kentus Eze, the PDP LG Chairman, Hon. Alexander Uramah, the special adviser to the governor, Hon. Chidi Nwomeh, the SSA to the governor, and Comrade Uwakwe Ezeja, expressed gratitude to Gov. Ugwuanyi for his administration’s attention to promoting rural development projects and programs that benefit the people of Igbo-Eze North LGA.