Angela Merkel’s potential successor; Armin Laschet has apologized after he was caught laughing during a press conference with Germany’s devastating flash floods victims.

The Christian Democrat (CDU) candidate for German chancellor, who will succeed Merkle in September election, was reportedly forced to apologize after sparking controversy yesterday. Laschet was caught laughing in the background during a speech from the German President, Frank-Walter Steinmeier who expressed his condolences to recent flood victims at North Rhine-Westphalia.

The devastating flooding in Germany has killed at least 150 people, with hundreds more still missing while many survivors have been left without access to electricity or clean drinking water.

In the background, Mr. Laschet could be seen standing and laughing at what appeared to be a private joke with colleagues. Mr. Laschet was forced into damage control after the embarrassing gaffe sparked a backlash from across the political spectrum. 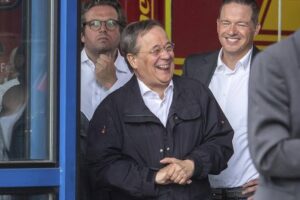 The best-selling Bild daily ran a headline that read: “Laschet laughs while the country cries.”

Maximilian Reimers from the far-left Die Linke opposition party tweeted: “This is all apparently a big joke to Laschet. How could he be a chancellor?”

The political frontrunner has faced some criticism in the past over his stance on climate change. Even after the historic floods, Mr. Laschet said: “You don’t change policy just because now we have a day like this.”

On the other hand, German Chancellor Angela Merkel visited areas particularly badly damaged on Sunday, to survey the damage and meet survivors.

Ms. Merkel was seen wearing hiking boots and giving fist-bumps to rescue workers in one of the two hardest-hit regions in western Germany.

At the moment, emergency services, soldiers, and volunteers are still searching for loved ones, and divers have been sent in to search submerged homes for bodies.

Nollywood Actress; Uche Jombo Reveals Her Family Source Of  Wealth
Woman Cries Out As Ghost Physically Assaults Her In The Shower