Chioma Afam, a 36-year-old, who assumes numerous identities and wears a hijab to avoid security inspection, was caught by NDLEA agents in Benue state, along with her colleague, Peace Chidinma Caleb, 22, for attempting to smuggle 296,000 Diazepam and Exol-5 tablets from Onitsha, Anambra state, to Gombe state.

Chioma, who goes by several names including Amina, Uzoamaka, and Ifunaya to hide her criminal activities, was apprehended on Saturday, July 17th, 2021, alongside Peace Chidinma Caleb, 22, who also wears a hijab to hide her nefarious activities during routine checks and profiling of inbound vehicles into Makurdi, Benue’s capital. Their vehicle, which was traveling from Onitsha, Anambra State, to Gombe State through Makurdi, was stopped along Alliade road, Makirdi.

Searching their car, 43 kilos of Diazepam and 33 kilograms of Exol-5 was found, both weighing 76 kilograms and containing a total of 296,000 tablets wrapped in four huge ‘Ghana must go’ bags.

The two across-state drug smugglers have turned down requests to pose with the exhibits without their headscarves. 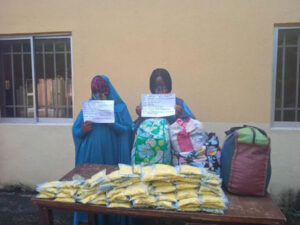 The Agency’s Ondo state command meanwhile, has nabbed one Olu Ameh, a commercial motorbike rider with 465 kilograms of Cannabis Sativa, along the Ijagba-Ute route in the state’s Ose local government area on Sunday, July 18th, 2021.

The illegal material was allegedly purchased from a man named Joseph in Ago-Akure, Akure North LGA, and delivered to the customer, a man named Egbonwon in Ijagba village, Ose LGA. 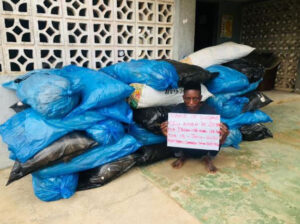 In response to the two seizures and arrests, the NDLEA’s Chairman/Chief Executive praised the commanders, officers, and men of the Agency’s Benue and Ondo state commands for their efforts to ensure that no illicit substance is allowed to pass through their areas of responsibility under any guise or cover to endanger the lives of innocent Nigerians in other parts of the country.

He wished them and their colleagues in other Commands across Nigeria a happy Sallah and urged them to be watchful at all times.

“For us in the NDLEA, a kilogram of illicit drug seized by our gallant and courageous officers across the country is a kilogram less than what is available on the streets and in our communities, and that is why we will continue to encourage all our officers and men to continue to give their best in our pursuit of the mandate President Muhammadu Buhari has given us,” Gen. Marwa said in Abuja on Wednesday.

Continue Reading
You may also like...
Related Topics:Drugs, NDLEA