A vehicle owner in Lagos state Nigeria has publicly narrated his ordeal with the Lagos State Vehicle Inspection Violation officials. The man whose identity was not revealed said he was arrested for a number plate violation and was asked to pay a fine of N20,000.

What for? You may ask.

The vehicle owner who posted what happened on social media alleged that the Vehicle Inspection Service officials accused him of having a faded number plate which is not acceptable and hence, will have to pay a fine of N20,000.

According to checks done by Hotjist.com on the Lagos State Transport Sector Reform Law of 2021, there was no indication of any offense related to or termed as ‘Faded Number Plate’, the only close offense, item number 8 on the list of traffic offenses, was referred to as “Driving a vehicle with the unauthorized or defective number plate”.

The fine for a first offender was quoted as N20,000 while a repeated offender will be charged a N30,000. 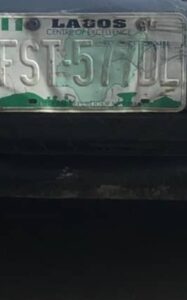 However, in the case of the said number plate as seen above, the plate is not defective and the letters on it are clearly visible.

An official of the Lagos State Vehicle Inspection Violation who spoke off-record insisted that there is no such offence as ‘Driving with Faded Number Plate’ and as such, the owner of the vehicle should make a formal complaint to the headquarters of the service.

The official further stated that Section 24 of the Transport Section Reform Law gives the motorist the power to contest any such penalty which appears to be contrary to the approved laws.

It seems what the Vehicle Inspection Violation doing is pure fraud.

Am of the opinion that a license plate is not supposed to fade out. It is supposed to last the life time of a car. How can you issue people a defective product?

The department in charge of these vehicle number plates should figure out why their license plates starts fading out faster than they should and fix the problem, instead of issuing fines for offences of their own making.

#BBNaija: My Dad Was Poisoned To Death – Chichi Reveals

Adamawa Journalist Beaten ‘Black And Blue’ By Her Husband (Images)