Governor of Osun State, Adegboyega Oyetola, has requested his people, particularly those in the state capital of Osogbo, should refrain from indiscriminate dumping of refuse and the construction of unlawful buildings on waterways.

He stated that it has been found that a large number of flooding incidents were caused by drainage and water obstruction problems.

Additionally, the Governor expressed his sympathies to citizens of the state who have been suffering as a result of the flood that decimated various sections of the state, particularly the state capital of Osogbo, earlier this week.

According to Oyetola, who made these observations during a visit to some impacted communities in the state on Tuesday, said the government is putting in significant effort to prevent further floods from occurring.

The governor urged locals to adopt a more environmentally conscious attitude and promised them that the required actions would be taken to address the situation after contacting the appropriate agencies, including emergency response and disaster management teams.

During a visit to the Alie hamlet in the Olorunda local government area, the governor stated that the moment had come for locals to adhere completely to environmental safety guidelines, stressing that this was the only way to permanently remove the threat of floods. 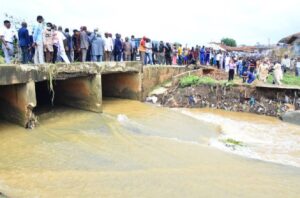 He explained that, after touring the area to assess the situation, he discovered that there had been significant damage and that areas requiring interventions such as dredging would be addressed as soon as possible.

Oyetola said that citizens must understand that water will always find a way to get where it wants to go since it can never be stopped and that it is, therefore, necessary to constantly provide it the right passage route.

While repeating that the government’s first concern was the safety of residents’ lives and property, he revealed that the location of the incident was not a major source of concern for officials.

The Oke-Ijetu area, Gbodofon community, Alie community, Alekunwodo area, Lameco area, and the GRA area were among the worst-hit places visited by the governor.