Marriage certificate is a contract binding two hearts together. The record of Boris Johnson  marriage to Carrie Symonds has been published today.

A copy of the historic wedding certificate was made available at Westminster Register Office and lists Mr. Johnson’s occupation as ‘Prime Minister of the United Kingdom.

The premier’s full name is given as Alexander Boris de Pfeffel Johnson. The Tory leader first started using his middle name as a public name while at school, but close friends and family call him Alexander or Al.

His wife Carrie, who is to be known as Mrs. Johnson, lists her job as a director of communications. The certificate obtained by the Sun on Sunday shows that her full name is Caroline Louise Bevan Symonds.

The record gives the couple’s address as 11-12 Downing Street, the Prime Minister’s official flat, where they live with their one-year-old son Wilfred, who was born last spring.

The priest was Father Daniel Humphreys, who baptized Wilfred last year, the certificate also shows. And the witnesses were close friends of Mrs. Johnson’s – Janna Lawrence and Catherine Humphrey.

Mr. Johnson, 57, married Miss Symonds, 33, at the Catholic Westminster Cathedral on May 29 and was followed by a celebration in the Rose Garden at Number 10 Downing Street.

The Tory leader is the first premier to marry in office in 199 years. He follows in the footsteps of Lord Liverpool, who married Mary Chester in 1822 and was prime minister for 15 years.

Mr. Johnson’s wedding before restrictions was due to be lifted on June 21 raised fears that big weddings would not go ahead this summer. In the end, the lockdown was extended to July 19, but the 30-guest limit on weddings was axed – though regulations forbid dancing and require masks.

As a twice-divorced man, the premier was still able to marry Miss Symonds in the Catholic cathedral because his previous non-Catholic marriages were not considered valid.
The couple tied the knot in secret before celebrating with a small group of family and friends. Cabinet ministers and Tory MPs friendly with Mr. Johnson were said to be upset at being excluded.

Mrs. Johnson hired her £2,870 wedding dress by designer Christos Costarellos for just £45 from MyWardrobeHQ for the day and said after the ceremony that she was ‘very, very happy.

Mr. Johnson is said to have picked his closest brother Leo – co-presenter of Radio 4 series Future Proofing -to stand by his side as his best man and provide moral support on his big day. 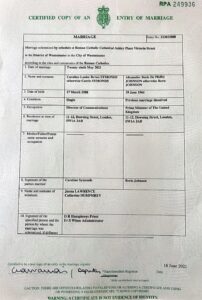 Fellow Johnson siblings Jo, Julia, and Rachel were also in attendance at the small wedding, the premier’s third.

Both the bride and groom’s mothers joined the summer festival-themed party in the Downing Street garden, but Carrie’s father Matthew Symonds was not present. It is not known if he was invited by the couple.

It is thought that none of Mr. Johnson’s four grown-up children from his second marriage to the QC Marina Wheeler were there to see their father remarry.

Allies of Mrs. Johnson said the wedding marked a victory against Dominic Cummings, the premier’s former chief advisor, and his inner circle. The two sides clashed during the time they shared in Downing Street, and have been engaged in a briefing war since Mr. Cumming’s firing in November.

The former No10 aide had told MPs that week that Mrs. Johnson had made allegedly ‘completely unethical and illegal’ moves to install her friends in No10 jobs and seeking to drive him out.

Although the rule limiting wedding parties to no more than 30 people will be dropped from tomorrow, restrictions on singing and dancing remain.

The signing of the register in weddings and civil partnership must currently take place within approved, permanent structures in premises licensed to hold such ceremonies, such as hotels.

But from July 1, couples will be able to have the whole ceremony outside at approved venues.

This change is designed to give more options to couples and will have a public health benefit, as the spread of Covid is hugely reduced outdoors.

Last night, Lord Chancellor Robert Buckland said: ‘A couple’s wedding day is one of the most special times in their lives and this change will allow them to celebrate it the way that they want.

‘At the same time, this step will support the marriage sector by providing greater choice and helping venues to meet the demand for larger ceremonies.’

The Government pledged in 2019 to legalize outdoor ceremonies.

Continue Reading
You may also like...
Related Topics:Prime Minister; Boris Johnson Becomes The First PM To Marry While In Office For 199 years As His Marriage Certificate To Carrie Symonds Was Published Today