According to Wikipedia, Ofada rice is a name for heritage varieties of rice grown in south-west Nigeria. It is used in a variety of dishes. Ofada rice are mostly blends, and some of the rice varieties in the blends are not indigenous to Africa; However, they usually also contain African rice. It is grown almost exclusively in Ogun State. it contains lots of vitamins and minerals that are good for your health. It is also high in fiber and is a very good substitute for people who are supposed to stay away from white rice or the imported rice. 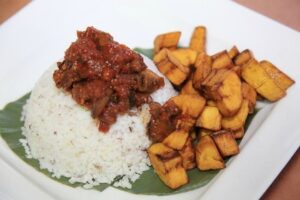 My first encounter with Ofada rice was in a party(in Jennifer’s voice parry) Oh I enjoyed it heh, it was on point👌👌👌the sauce was amazing. It was wonderfully made. Most times I go for it in parties. So if you are inviting me for a party, abeg make una cook Ofada rice ooooo.

Trust me when I say the taste is out of this world. 🤣🤣🤣

If you know you have not tasted Ofada Rice, abeg, biko, e jowo, don allah Go and try it, don’t be told. I’m pretty sure you will thank me later for sharing this food menu with you.