If you have ever tried eating Efo riro and Eba, please gather here, let’s reason together. Ve’ got juicy gist for you!

Yummy Efo riro is a special and popular delicacy among the Yoruba tribe in Nigeria. It’s a rich
vegetable soup and it can be eaten with variety of side dishes like Eba, Pounded yam, Semo, Rice e.t.c 🍛🍛🍛🍛🍛 Since am an undiluted Naija babe, my favourite swallow is ‘Eba’.

The name of the Nigerian man is Mr. Yakoyo while the American man is identified as Mr White. Now to my gist.. 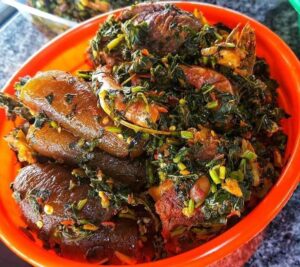 One day while Mr. Yakoyo and Mr White were on the dining waiting for their food, they were gisting as usual and the cook 👩🏻‍🍳👩🏻‍🍳 brought the food to them, she served it and left. When they finally started eating, Gobeeee Mr White was shouting
“cook! cook!! cook!!! Why do you hate me? Help me oohh🤣🤣 I want to go back to my country”
Mr Black was laughing 😄😄😄😄and immediately told him that the food is delicious👌👌👌👌 and that he should continue with his meal. He also said that he has been eating his own meal that has no pepper for the past one month.He further said he should please enjoy his Efo riro with him.

At first Mr White did not like the food in fact he hated it, but Mr Black made sure the cook did not prepare any other food until they had finished eating the Efo riro.

One day when Mr White was tired of cereal, he asked d cook👩🏻‍🍳👩🏻‍🍳 to bring him his food for lunch and the cook brought succulent Eba and correct Efo riro with orishirichi (that is with some assorted meat) inside the soup. Oh wonderful!!! Omo e be like say e dey my front. 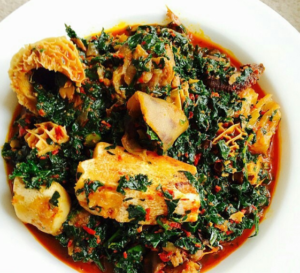 Mr Black was doing a video recording of Mr White and he called the cook, a friend of his that came visiting and they all could not hold back their laughter😄😄😄😄😄😄. Mr White was surprised at first but he later joined them and they were all happy.
Ever since then, Mr White does not joke with his Efo riro and anything succulent to go with it.

That’s the end of my story🤣🤣🤣🤣. Mr White like better thing.

Do you know that Vegetables are highly nutritious and packed with the necessary ingredients required by our bodies? Infact I love ❤❤❤ vegetables so much that I hardly cook without adding vegetables, no matter how little it might be.

Do you know that the founder of Facebook, Mark Zuckerberg eats and loves Efo riro alot? 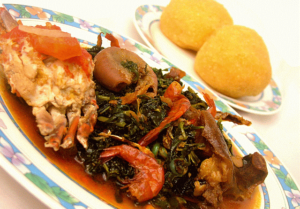 Do you also know that Efo riro can also be called Spinach Stew? All these are my findings on Efo riro.

Efo riro happens to be one of the most delicious Yoruba soups that I have ever known.

ECOWAS Court Directs Nigerian Government To Pay Agba Jalingo N30m Over Detention Torture
HOW MUCH WE NEED CHRIST THE PHYSICIAN!