Ikpeazu gave the order while speaking as a special guest at the 53rd birthday celebration.

He also invited the honored guest to attend and accept delivery of 20 solar lights to be installed in the stadium named after him, the Governor.

The Governor noted that during the forthcoming dry season, rigorous road construction work will be carried out and that the Obikabia-Umuee road will be completed.

As he plans to visit issues in every region of the state, he implored Abia state citizens to be patient with his government.

He added that switching political parties will not solve the problem, but that representing the people well will, and pledged to remain a PDP member.

He was appreciated by the Abia Chief Executive who commissioned the Dr. Okezie Ikpeazu Mini Stadium and other items presented by the celebrity. He also wished him more existing years and spoke to beneficiaries of efforts to make suitable use of the materials offered.

Senator T. A. Orji, who represents Abia Central in the National Assembly, also spoke, thanking the celebrant for his contributions to the community. 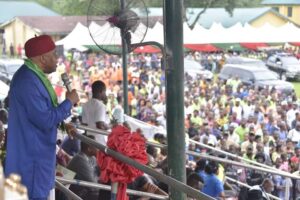 Darlington Nwokocha was commended as a dedicated and committed friend who represents his constituents well, and he asked Abia polity stakeholders to support Governor Okezie Ikpeazu’s efforts to move the state ahead.

Rt. Hon. Chinedum Orji, Speaker of the Abia State House of Assembly, and Rt. Hon. Asiforo Okere, State Chairman of the PDP, described Darlington Nwokocha as a true party man, saying he had introduced a new dimension in legislation by attracting, implementing, and executing projects within his constituency.

The event’s Chairman and the PDP’s National Organizing Secretary, Col. Austin Akobundu (Rtd. ), described the commissioning of Darlington’s projects, including the ICT center, Legislative Chambers, and mini stadium, as well as well-planned and wonderful birthday gifts to his constituents aimed at building capacity, and praised Darlington Nwokocha for making history.

Darlington Nwokocha had given representation a new dimension, according to Chief Asiforo Okere, the PDP’s state chairman, who said he had observed the commissioning of several of the lawmaker’s projects and described him as a devoted party man and representative of his constituents.

On behalf of Isialangwa North and South stakeholders, the member representing Isialangwa North State Constituency, Chief Ginger Onwusibe, and the Board Chairman of Abia State Polytechnic Aba, Elder John Nwangborogwu, spoke, commending the celebrant for his quality representation of his people and encouraging him to continue putting smiles on their faces.

Darlington Nwokocha, the honoree, said in his address that everything he had done for his people had been in support of Governor Okezie Ikpeazu’s grassroots development projects, and he thanked God for bringing him from obscurity to fame.

Governor Ikpeazu said at the commissioning that the road is a crucial economic corridor connecting the renowned Onicha Ngwa Hospital with Akwa Ibom State. He noted that the beneficiary communities would have access to Aba and Umuahia for the first time in their history.

He gave the citizens the task of making sure that no bonfires were lit on the road and that the drainage systems were kept clean at all times.

He went on to say that road commissioning would continue until his last day in office, emphasizing that he is in office to make a positive difference in people’s lives and thanked the State House of Assembly for its unwavering support.