There are several ways to deal with heartbreak from a cheating partner. Some take painful revenge on their partners while some just let things go but one lady decides to take the most hilarious revenge that I just can’t stop laughing at.

Lauren Lilley was so hurt after discovering her boyfriend of two years, Nathan Smith, had been cheating, that she wanted to get back on him.

The “scorned” woman revealed to Mirror how she got back on her cheating ex – by spending £500 of his money on films about cheating on his Amazon account.

Lauren Lilley and Nathan Smith had been together for more than two years when she claims she discovered in November 2020 he had been seeing another woman.

The 29-year-old recalled a “gut feeling” which led her to check his message while he was asleep on November 27, 2020. It was then that she found proof he was being unfaithful.

The mum-of-one threw him out of the house and chucked out all his belongings before crying for days over the breakdown of their relationship. However, she soon realized she was still logged into his Amazon account.

The nurse then decided to exact revenge by ‘hitting him where it hurt’, splurging an eye-watering £500 on the movies – many from Bollywood using Amazon Prime – while she sat in bed “crying and laughing.”

Lauren claims Nathan, 26, has since been in touch to commend her for her creative vengeance, calling it “f***ing brilliant” and admitting he would never forget it.

Lauren, from Salisbury, Wiltshire, said: “It’s a creative way to get back at someone. I had fun doing it. I’m definitely going to tell the grandkids about it. I can even pat myself on the back for it because it was pretty funny.

She admits that many of her friends pleaded with her to end the relationship sooner than she did, but she was blinded by love.

Lauren said: “On the night [before the break-up], he was knackered and fell asleep. I had a gut feeling to check his phone, which I’ve never ever done. I [had already given] him my passwords [so he could check my phone if he wanted].

“That night, I don’t know what it was, but I couldn’t sleep. I just had this gut feeling and it was in my head saying check his phone. I’m usually a content person but he made me so insecure.

“There was a bit in me that just said ‘no – check it and if there’s nothing there you can fess up in the morning’. I checked the phone then my world fell apart.

“I found out he was having [a relationship with someone else]. I woke him up quietly and nicely and said ‘you need to get the f*** out of my house now. He woke up [wondering] what the hell was going on. I [threw] his stuff out the front door.” 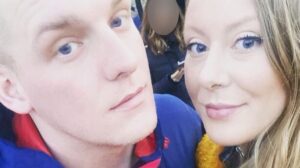 After two days of sizzling with anger, Lauren claims she suddenly realized she was still logged into Nathan’s Amazon account and decided on a way to “hit him.”

Lauren said: “A couple of days later after crying and being a mess, I realized I was still logged into his Amazon Prime account.

“I just thought after everything I’ve been put through for over two years, and he doesn’t care for what he’s done, I knew where to hit him where it hurt – in his bank balance. I knew that was the way to hit him.

“I didn’t want to buy films he would benefit from. I ventured into the Bollywood scene. He was at work so I knew he wouldn’t be on his phone to get alerts. I realized they’ve got really authentic names. I started seeing stuff like Cheater.

“I thought ‘right, I’m going to buy so many films with the title of any deceit or disrespect he’s [shown]’. I bought him Cheater, Deceitful, The Unworthy, Liar. The names of these Bollywood films were great.

“I knew he’d be able to get his money back but to be at work, cold, in the middle of nowhere, to then look at your bank balance and how much has gone out, [I knew] his a*** was going to fall out.

“I knew he’d eventually get refunded. In the meantime, I knew his a**e would drop through and he’d be gutted that his bank balance was dented.”

Nathan had been at work at the end of November when he claims he received a call from his bank’s fraud squad, warning him of suspicious activity on his account.

Nathan, from North Yorkshire, said: “It didn’t surprise me when I got the notification. Lauren can be very manipulative. The DVD thing was quite refreshing considering what she normally does.

“When I saw the names of the DVDs, I thought it was quite hilarious. I handled it with good humour. She was trying to get back at me. It’s fair enough. It was quite understandable. We’re both away from each other now. I have an easy life.”

This is the funniest breakup revenge have ever come across.

Continue Reading
You may also like...
Related Topics:Cheating Ex

“If Igbos Ask Me To Contest For Presidency In 2023, I Will Accept,” Pat Utomi Says
I’m The Real Initiator Of The Final Settlement Between Davido And Wizkid – Israel DMW Claims