A man found guilty for the brutal slaying of two hotel workers during a robbery in 2001 has been executed in Oklahoma.

Donald Grant, 46, received a lethal injection at the Oklahoma State Penitentiary in McAlester on Thursday and was declared dead at 10:16 a.m. It was the first execution in the U.S. in 2022 and the third in Oklahoma since the state resumed lethal injections in October following a nearly seven-year hiatus.

Grant had asked a federal judge to temporarily halt his execution, arguing that he should be reinstated as a plaintiff in a separate lawsuit challenging Oklahoma’s three-drug lethal injection protocol as presenting a risk of unconstitutional pain and suffering. But both a federal judge and a three-judge panel of the 10th U.S. Circuit Court of Appeals in Denver previously denied that request. The U.S. Supreme Court denied Grant’s request on Wednesday.

Several Oklahoma death row inmates with pending execution dates have sought to delay their executions after John Grant convulsed on the gurney and vomited after receiving the first dose of midazolam, a sedative, during his October execution. 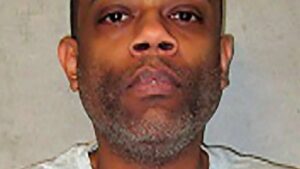 John Grant’s execution was the state’s first since problems with the state’s lethal injection in 2014 and 2015 led to a de facto moratorium. Richard Glossip was just hours away from being executed in September 2015 when prison officials realized they received the wrong lethal drug. It was later learned the same wrong drug had been used to execute an inmate in January 2015.

The drug mix-ups followed a botched execution in April 2014 in which inmate Clayton Lockett struggled on a gurney before dying 43 minutes into his lethal injection — and after the state’s prisons chief ordered executioners to stop.

During a clemency hearing in November, Donald Grant admitted killing Brenda McElyea and Felicia Suzette Smith so that there would be no witnesses to his robbery of the Del City hotel. Court records show both women were shot and stabbed, and Smith was also bludgeoned. Prosecutors say both women also begged him to spare their lives before he killed them.

During November’s hearing, he expressed “deep, sincere remorse” and apologized for the killings, but the state’s Pardon and Parole Board voted 4-1 against recommending clemency.

What a sad end!