As the Lagos state government clears five students and five employees of any involvement in Sylvester’s death, family, friends, and well wishes have shown their displeasure in the decision of the government.

Some Ijaw youths have shown their disapproval as they were seen offering prayers of vengeance in front of Dowen college over the death of 11-year-old Sylvester Oromoni.

The protesting youths called on Sylvester’s spirit to arise and ensure he gets justice.

After the Lagos state government cleared five students and five staff of any involvement in Sylvester’s death, they staged a protest in front of Dowen College to express their dissatisfaction.

Oromoni’s mother also was not happy about the decisions as she made a video shortly after the Dowen College students and officials were exonerated, crying that she wouldn’t be able to celebrate Christmas and New Year with her son.

She said, “The whole world will know that there is God that fights for the oppressed.

“Jehovah God, arise. King of glory, arise and cut short the lives of those that cut the life of my son short, including those supporting them. 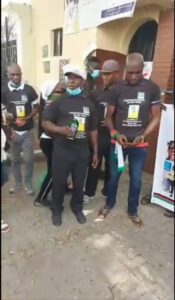 “Let them feel the pains that I’m passing through. If they breathe the air that you created, God let your rod fall on them.”

The names of the students cleared by the state government are 16-year-old Favour Benjamin, Edward Begue (16), Ansel Temile (14) and Kenneth Inyang (15) and 15-year-old Micheal Kashamu, the son of the late senator, Buruji Kashamu.

Sylvester’s father also reacted insisting that he will not give up and his family will meet with his lawyers on the way forward.

He said, “This one is not new to us. I remember of the 31 st of December when the Commissioner of Police was making his speech, he mentioned that at the instance of the governor, the Attorney General, and the DPP, they have completed their investigation.

“They discovered that the children, housemasters have no case so he has released them on bail, discharged. He is not the court to decide this matter. What I will tell you is that the family will sit with our lawyers, we will respond appropriately and that time, all of you will be there.

“But on the main time, let me assure you that on December 21, the same Commissioner of Police told me that they were not done with their investigation. They also told me that they are writing to the Attorney General of the state and the Governor to return those boys back.

“There was a holiday on Monday, Tuesday and all of that. Don’t worry; we are not bothered, we have heard of this before. This is just the beginning of the case.

Below is the video;